Part of a Collar in Floral Bedfordshire Lace

This piece of floral Bedfordshire lace came to me from the collection of the late Mrs Pat Armstrong. Her main interest had been embroidery, but she had also been interested in lace, and her collection filled several boxes. Her husband didn’t know where she had acquired this piece of Bedfordshire but was sure she hadn’t been responsible for cutting it up.

The lace is made with very fine thread, and it was only when I took come close-ups with my digital camera and looked at them on a computer screen that I was able to appreciate the interesting techniques used by the maker. 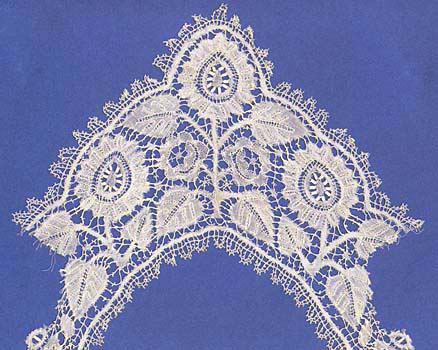 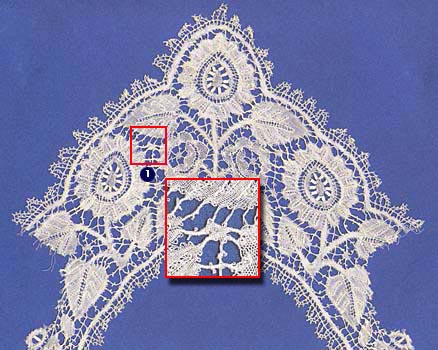 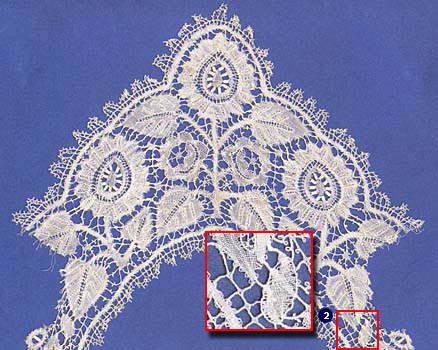 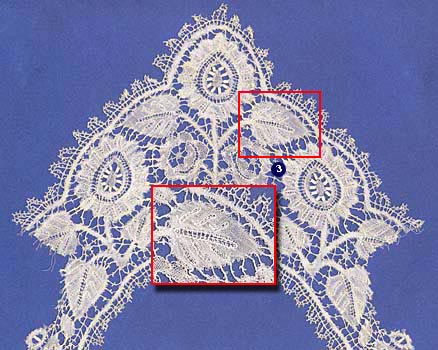 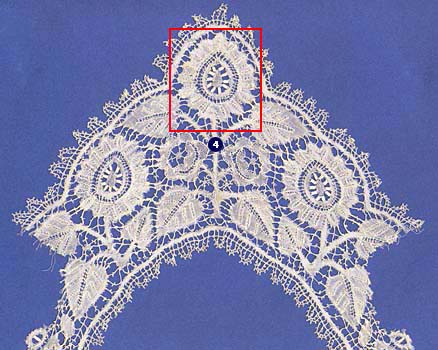 The part collar above is at 60% of the actual size (on a computer screen), but I have enlarged four details to illustrate different aspects of the lace. The details can be located on the image by selecting the different numbers, and the enlargements found below. (Scroll down; or click/tap on the detail in the image to be taken directly to the enlargement and description.) 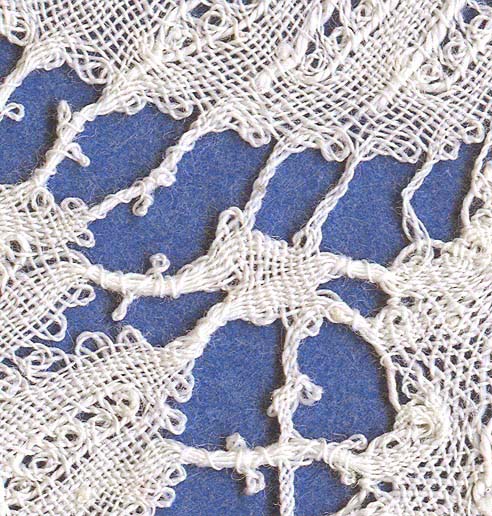 Detail showing bundles of pairs between parts of the pattern, 8× magnification

When I first loked at this piece I noticed that some of the plaits were thicker than others (three- and four-pair plaits are not unusual in floral Bedfordshire) but it was only with high magnification that I was able to see that these thicker plaits and many of the other plaits were actually bundles of pairs with a pair wrapped around them.

As a result of mounting these pictures I heard from Jenny Davies that she had seen bundled pairs (roulotté is the French name for this technique) in a piece of Bedfordshire lace that is part of the Cecil Higgins collection. She wrote that “The piece of lace is BML 53 and is shown on page 9 in the book ‘A Celebration of Bedfordshire Lace’ published for the exhibition at the time of the OIDFA congress in 2002. I have a photo of the footside of the lace which shows it more clearly and I am certain the lacemaker has used roulotté to carry six pairs from the base of the flowers to the wheel in the ground and then on to the next flower top.”

I would still be interested to hear of any other examples of Bedfordshire lace where pairs are bundled like this. 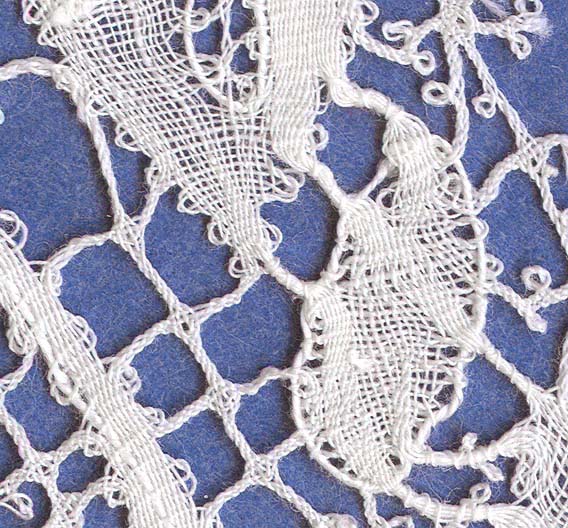 In Bedfordshire lace today windmill crossings in which each pair is treated as a single thread are used where two plaits cross, but in this piece the plait pairs are treated separately and the crossing is worked with four cloth stitches — see the digrams on the right. If you look at the top right-hand corner of the detail there is a six-pair crossing which is also worked with cloth stitches.

Detail 3: One of the leaves 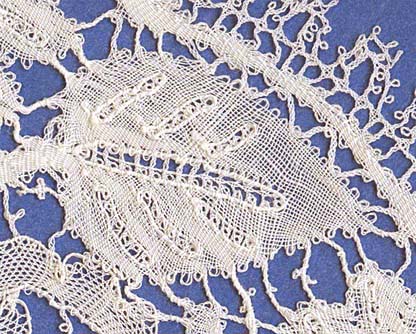 One of the leaves at 3× magnification

Sketch of the leaf showing where pairs
enter and leave

The leaf was started at the tip and divided at the top of the vein, with the right-hand part (lower part in the sketch) being worked first. Pairs left out from the first part cross the central vein to be taken into the second half. Notice that the angle of work is such that in the first half the side veins are at right angles to the path of the worker pairs, whereas in the second half they are parallel to it.

A single pair running along the central vein works with the pairs moving from the first to the second part. If you look carefully you’ll see that there's a change about half way along — to the right single pairs crossing the vein work a cloth stitch and twist with the central pair, but from about half way along two pairs cross as a plait at each set of pins-holes. The plait is treated a a gimp and taken between the threads of the central pair instead of working a stitch. 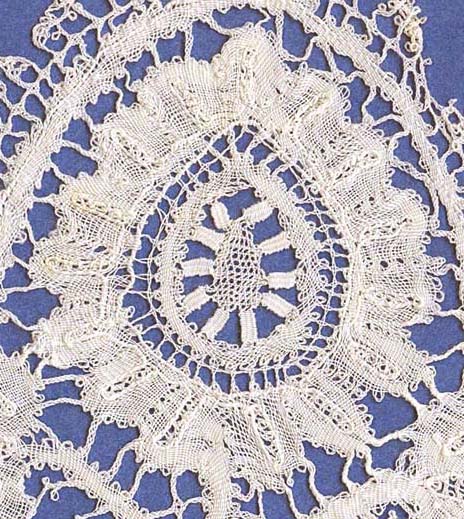 The central flower at 3× magnification

Sketch of the flower showing starting
and finishing points, direction of working
and where pairs enter and leave

I found it fascinating to work out how the flower had been made, and it left me full of admiration for the way in which the lacemaker had managed so many pairs and organized them so that everything ‘came out even’ at the end.

I have indicated the gimps — a pair starts at a vein and then runs around the inner edge of the petals, and two single gimps (one in each direction) start at veins and continue round outlining the other veins. The pairs crossing the main vein between the petals and the central feature are only marked with arrows where the central feature starts and the change from pairs entering to pairs leaving this feature occurs.